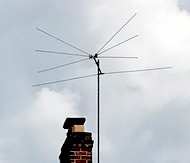 Althea.net is an approach to Internet service that's an internet itself, sort of. Naturally, blockchain is involved.

When I was a kid, every house had an outside TV antenna that looked like this.

Dana Blankenhorn goes full Godwin with Tolerance, Technology, and the American Hitler. Most Godwinian analogies leave me cold, but this one didn't. Read it.

No surprise that trust is going to hell. (Sez Pew, via NiemanLab.)

Help the feds (heaven) help us all with AI.

Says here the tracking cookie is dead and contextual advertising (an old thing) is the new real thing. Note: if the tracking cookie was really dead, most of those cookie notices you see would say "Our cookies are for our site's use only." They don't, they're not dead and killing them is still a worthy cause.

Says France's CNIL, "On the one hand, simply continuing to browse a site can no longer be viewed as a valid expression of consent to the deposit of cookies . On the other hand, operators who operate tracers must be able to prove that they have obtained the consent." The one hand is good. The other hand is same-old, and continues to suck. So does sites needing to provide users with "a device for withdrawing consent that is easy to access and use." Users should have their own damn device: one that can work the same standard way across all the sites on the Web.

Umair Haque says agency "makes us suppose that one day, with enough “agency”, we can be omnipotent super-beings. The real question is: where does agency, which is to say power, come from?" I say it comes from tech that made to make us exactly that. Encouraging that has been my work, pretty much ever since Cluetrain.  Also, Ray Dalio explains why I'm optimistic about that work.

Danny Weitzner and Cameron Kerry on Rulemaking and its Discontents, from Brookings.

No surprise that, in Australia, people trust outfits that don't do shitty stuff with their personal data.

The most powerful FM transmitter in Canada (CKOI's on 96.9 in Montréal) has finished moving from this thing on the top of the CNIL building downtown to this one on the top of Mount Royal. Formerly 307,000 watts, it's now 148,000 watts, but not shadowed to the north by Mount Royal itself. Mouse over that last link for details on that antenna, if you're one of the few people who care. All those links, btw, are informed by Fagstein.

On the Radio Lockdown Directive. My opinion on this is not yet sufficiently informed by facts that will include the ones here.

Went to the Redpath Museum a couple days ago. It is, indeed, "a museum that belongs in a museum." It also has no air conditioning and was so fucking hot that the third floor (the one with the mummy in that link) was closed.

I'm pretty sure everyone named Englert here is a relative. That link is to a cemetery in Utica, New York, where my great-grandparents, Christian and Jacobina (née Rung) Englert grew hops for the beer they made, and where both died, though they are buried at Woodlawn Cemetery in The Bronx.