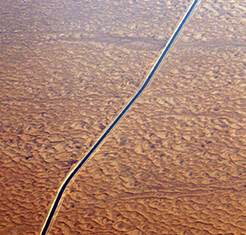 I wish I could crash RightsCon today.  It's not too far (Tunisia) from where I am now (in Spain), and lots of friends and fellow activists are there. But I'm at work here, and that's good too. In the meantime, I've been wondering about what I might like to share with RightsCon from across the Mediterranean. Maybe this will help. It's from A Line in the Sand, in February's Linux Journal:

At a deeper level, what (some of us)  have been trying to do all along is prove that free people are worth more than captive ones, both to themselves and to everyone and everything else. In terms of The Matrix, we want to make each of us a Neo.

Working to free people from The Matrix is hard, because it's not just about making the software and hardware we need. Relatively speaking, those are low-hanging fruit. So is getting publicity for it.

The hard thing is that the big money and demand for work is mostly in making The Matrix less bad.

And it's true: we do need people pushing the status quo in a helpful direction. We also need activists to reform all our standing institutions, from politics to health care to education to social media and its platforms. It's also good that these kinds of work tend to pay, through credentials, experience and money. And let's face the fact that it's easier to see what's wrong in the world as it is, and to fight for changing it, than it is to see first causes at a deeper level, and then work to change damn near everything above that level with a few good hacks.

But it can be done. We did with all the free and open-source protocols and code bases on which our networked world now utterly depends. We can do it again to make free individuals more valuable than captive ones.

And that's the line we need to draw here: one between what we want for people as independent agents of themselves and all the ways people can work to improve the status quo for both institutions and the people who depend on them.

We can sort this out with a two-part question:

Neither side is wrong. I want to make that clear. I also want to make clear that the deepest work we need to do—the truly radical and world-changing stuff—is on the first side. And that's the side that needs us the most.

Last April, in "How Wizards and Muggles Break Free from the Matrix", I put up a punch list of 13 different things already being done to help break everyone free of institutions that would rather hold them captive—and to build bases for far better institutions in the process.

At the time I wrote that, I assumed that the GDPR would clear paths for work already moving forward within all 13 items on that muggle-liberating punch list. Alas, the GDPR's single positive achievement so far has been shaking things up. The worst thing the GDPR has done is encourage surveillance capitalists to keep doing the same damn things, only now with the "consent" of "data subjects" clicking "agree" to misleading cookie notices everywhere.

But the work proceeds (and the list of places where it's proceeding is now up to 17 items), and all of it can use your help.

So please, let us know which side of the line you stand on and what you're ready to do about it (or, better yet, already doing). Thanks.