This thing is bigger than journalism
by Doc Searls Monday, June 10, 2019 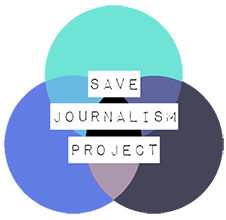 Savejournalism.org wants me to join their fight against Big Tech. They say

BIG TECH IS TO BLAME
Google, Apple, and Facebook are using their tech muscles to monetize news for their own profit, but at the expense of journalists.

All due respect (and much is due), I don't agree.

First, journalists have been working for magazines, broadcasters, newsletters and themselves for dozens of years, or for centuries. So journalism isn't just about newspapers. Second, because so many journalists have long made livings in those other media, the loss of work is far larger than the 2,400 gone from newspapers. It's truly massive. I don't know any field where the loss of jobs is larger. Not taxi driving, not hospitality, not retail, not manufacturing... not anything I can think of. (Well, maybe nuns. I don't see many of those these days.)

And yet there is more journalism than ever: in blogs, social media, podcasting and other media. Most of it doesn't pay, but that doesn't disqualify it as journalism. Hell, I'm doing it here and this doesn't pay.

Second, Big Tech is more effect than cause. (I'll explain why shortly.) And it's way too easy to blame.

And hey, if you're blaming Big Things, why stop at those three tech companies? How about Amazon, which is in the middle of destroying and re-making all of retail and distribution? Or Netflix, which has turned all of television into one big streaming subscription business, much of it with no advertising (which once paid big news operations)? Or, within television, CNN, MSNBC and Fox News, which have morphed into the trampoline-like walls of partisan echo chambers? They used to be where you went for news. Now they're mostly opinion, most of which is one-sided.

Every new technology, McLuhan says (in The Medium is the Massage), "works us over completely." And no new medium, no new technologies, have ever worked us over more than digital tech.

A few months back I had a brief conversation about this with Joi Ito. I asked him how big he thought the digital transformation was. Bigger than broadcast? Print? Writing? Speech? Stone tools?

"No," he replied. "It's the biggest thing since oxygenation." In case you don't recall, that happened around 2 billion years ago.

Journalism is just one collateral casualty of digitalization. Also a beneficiary, methinks. But I don't yet know, and I won't ever know. Life is too short, and the change is too long.

But we do need to understand it as best we can in the meantime.

Here's one outfit working on that. I don't buy everything pitched at that link (at least partly because it's novel and not the easiest grok), but I think the work is important and it's a good start, which is why I weigh in on it.

I also don't expect journalists to take much interest in it, because digitalization (if that be the right word) isn't a story, which is journalism's stock in trade. I explain a bit about journalism's "story problem" in this TEDx talk.

Still, some journalists are on the case, including me. Love to have others join in.