Is the Age of Advertising ending?
by Doc Searls Wednesday, April 18, 2018 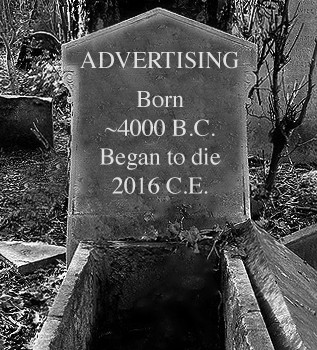 To compete with Netflix and other rivals, TV networks are cutting down on commercial interruptions. But as Ad Age's Jeanine Poggi writes in a deep-dive on the topic, the economics of that are "daunting." And exactly how much extra should advertisers be paying for ads in a less cluttered environment?

I just posted a response in AdAge to the second link:

Here's the hard thing: there is no demand by people on the receiving end for ads, and many more ways to avoid ads in our digital age.

Netflix's success owes both to content (they have more than anybody) and to the absence of advertising. For viewers, absence of ads is a giant relief after seventy years of suffering annoying time-sucks between what people tune in to watch.

Yes, there are still program types—notably live sports, talk and breaking news—that tend to hold people still for ads, but even there the growing range of choices support avoidance. For listening to what used to be radio, a sports fan can jump between almost too many channels to count on SiriusXM (http://satelliteradiousa.com/channels/sports.html), and do the same among sports stations on a phone app such as TuneIn Radio, or on their smart speaker from Amazon or Google—in addition to choices left on old-fashioned terrestrial radio and cable/satellite TV.

For long-form listening, they can also go to podcasts and hit that little circular arrow to jump forward fifteen seconds at a time to get through the ads—if there is advertising at all. Adtech—the spyware-aimed advertising that caused the GDPR (look it up) in Europe, is also a fail, especially for branding. (After a $trillion spent, not one brand known to the world has been made by it.)

So here is an existential question: is the Ad Age (literally) ending ? I asked that two years ago http://bit.ly/adsg0die and so far the answer is no. Still...

Then I ran out of space. Fortunately I've said plenty already, here.