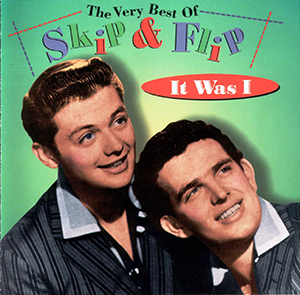 This morning's music: best of Skip & Flip.  It's not a big catalog. Or good. Just interesting.

Skip was Clyde Battin, and Flip was Gary S. Paxton, both of whom enjoyed long careers in more notable bands, doing more notable work, with longer hair and less formal clothes. (Skip and Flip were the names of dogs one of them owned.)

Though best known for "Cherry Pie" and "It was I," the Skip & Flip recording that stands out for me  is "Fancy Nancy," a dumb novelty song from 1959 that deservedly got only to #71 on the US Billboard chart. Call it up on your music-summoning app of choice, and listen with headphones. You'll hear how primitive recording studio art was before they could mix channels. (Actually, they could before then, but here they chose not to.) So you get vocals on the left, all other instruments on the right, and nothing in the middle.

Listen for the electric rockabilly guitar bridge with riffs and licks that would become familiar in the decade that followed. One of those later works that stands out for me is Lonnie Mack's instrumental version of Chuck Berry's "Memphis, Tennessee" (though the hit version was by Johnny Rivers). Just titled "Memphis," it charted in the summer of 1963. A landmark work.

From that last link, "According to musicologist Richard T. Pinnell, Mack's upbeat, fast-paced take on electric blues-guitar in "Memphis" was unprecedented in the history of rock guitar soloing to that point, producing a tune that was both "rhythmically and melodically full of fire" and "one of the milestones of early rock and roll guitar". Well, not quite unprecedented, unless that was Lonnie on that Skip & Flip session.

Alas, all but Johnny Rivers are now gone.