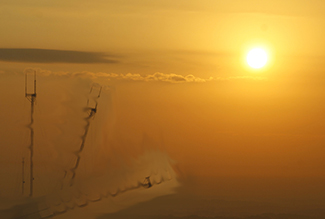 Since nearly all of the pirates speak in Spanish or some Caribbean English dialect, and to mainstream media downtown the outer boroughs (including "upstate Manhattan") might as well be Canada, the topic is approximately never covered. Except by me, every couple years or so:

And, in the midst,

The slow sidelining of over-the-air radio (2016)

I see the day, not long from now, when some museum will replicate the radio listening experience with genuine OTA (over the air) radios of various vintages, over which one can listen to in-house low power AM and FM transmitters, simulating what listening to radio sounded like in, say, 1935 (serials, soap operas), 1959 (rock and roll), 1973 (disco), 1982 (album rock), 1996 (rap, hip-hop) and 2018 ("and on your smart speaker").

But not 2025. Because by then much of what used to be radio will have moved to streams and podcasts over the Net, satellite and DAB in Europe and elsewhere. (DRM—Digital Radio Mondiale—is a technology in which a few old stalwarts continue to invest hope, but there is none, save what little shows up here, last updated in 2016. Coulda been a contenda, but: nah.)

That last link is but one page among many at Ydun’s Medium Wave Info news page, where over-the-air radio, worldwide, can be seen going down, down, down, up a little, down... well not quite yet, but yeah, down...