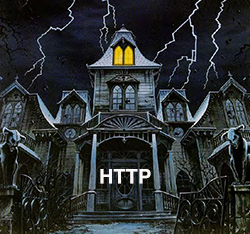 The archival Web—the one you see through the protocol HTTP—will soon be condemned, cordoned off behind Google's police tape, labeled "insecure" on every current Chrome browser.

For some perspective on this, imagine if suddenly all the national parks in the world became forbidden zones because nature created them before they could only be seen through crypto eyeglasses.

Every legacy website, nearly all of which were created with no malice, commit no fraud and distribute no malware, will become haunted houses: still there, but too scary for most people to visit.

It's easy to imagine, and Google wants you to imagine it.

What will happen to calls on HTTPS sites that go out to HTTP sources, for example of images? That's what we have with the image you see on that post. That image lives on http://searls.com, an old server that sits in a rack somewhere in Dallas. One of these days I may get around to updating everything there to an https address, and then going back to posts like this one and re-composing the linkage.

But probably not, because I'm too busy doing other stuff.

As Dave put it way back here, the costs are prohibitive—in time, money, hassle and all the rest.

Most legacy blog sites—ones created long before HTTPS became a thing—will just sit there forever behind Google's police tape. I hope my old one, http://doc.weblogs.com, stays up. I have countless links pointing into it since I stopped writing there in 2007. But many visitors driving Chrome browsers will be scared off because it's labeled "insecure."

Yes, people can still go under the police tape. The old houses that stay up will still be open in some cases. But the original Web will cut off, starved of traffic, left to die as one big old ghost town. And that's a damned shame. Literally.