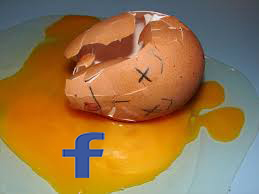 In Facebook CEO Vows To Rid Social Network Of Bad Info, Actors, @mp_gavin says Mark Zuckerberg's Facebook post promising "To cleanse his social network of trolls, purveyors of false and misleading information, and other bad actors" is "his most ambitious pledge yet."

See, what we're talking about here is trying to fix just one kind of awfulness produced by the world's most consequential algorithm—one designed to allow anybody on earth, at any budget level, to micro-target ads at highly characterized human beings, using up to millions of different combinations of targeting characteristics (including ones provided by parties outside Facebook, such as Cambridge Analytica, which have deep psychological profiles of millions of Facebook members)—by giving actual human beings (not just fancy machine systems doing AI, ML and other cool hot tech stuff) what The Wall Street Journal calls "The Worst Job in Technology: Staring at Human Depravity to Keep It Off Facebook."

This is not only ironic in the extreme (in case you missed it in my too-wordy paragraph above, we have humans fixing the unavoidable errors of machines meant to understand humans), but also impossible to pull off.

Facebook's message-aiming system (good for fake news as well as ads) is too complex, too massive (Facebook has many data centers, each the size of a Walmart or few), too difficult and expensive to rebuild, and too good at what it does. It would be like turning a cruise ship into an aircraft carrier.

And, to a creepy degree, both the ads and prejudice-stoking postings actually work well enough—at least for the people and organizations placing them. That it works for bad guys as well as good guys—and is bad for culture and democracy—is a feature, not a bug. Again, it was designed to do exactly what it does.

You know Goethe's (or hell, Disney's) story of The Sorceror's Apprentice? Look it up. It'll help. Because Mark Zuckerberg is both the the sorcerer and the apprentice. The difference with Zuck is that he doesn't have all the mastery that's in the sorcerer's job description. He can't control the spirits released by machines designed to violate personal privacy, produce echo chambers, and to rationalize both by pointing at how popular it all is with the billions who serve as human targets for messages (while saying as little as possible about the $billions that bad acting makes for the company).

Switching metaphors, Facebook is Humpty-Dumpty, and it's already on the ground. None of King Mark's horses (e.g. better algorithms) or men (and women, doing icky jobs) can put it together again.

Look at what's happening for Zuck in terms of grief stages: denial, anger, bargaining and acceptance.

At first he denied that the problem was there—even as fraudulent and misleading ads ran right next to the post where he did the denying. I suppose he went through the anger stage in private. Now he's at the bargaining stage, betting that humans with awful jobs can halt the rising tide of outrage and embarrassment.

He's not alone. In How to Fix Facebook—Before It Fixes Us, Roger McNamee, an investor and old friend of Zuckerberg's, deeply examines What Went Wrong, and teams up with ethicist Tristan Harris to produce an eight-point prescription for fixing Facebook, and all the awful shit it's doing to us.

It won't work, because it can't.

John Battelle explains why in two pieces published in his magazine NewCo Shift. The first, which went up last September, is Lost Context: How Did We End Up Here? The second, published today, is Facebook Can't Be Fixed. As his subhead explains, "Facebook’s fundamental problem is not foreign interference, spam bots, trolls, or fame mongers. It’s the company’s core business model, and abandoning it is not an option." That nicely compresses my main point here.

The best thing all of us can do, both for ourselves and for Facebook, is face both what it has become and how terminal it is.

The best thing for Zuck to do is get the hell out, let it finish failing, and start over with something new and better, based on what he and others have learned from the experience. (Which tends to be the best teacher. And hell, he's still young.) It should help him—and all of us—to know that all companies fail; they just fail faster in Silicon Valley.

Google has the same problem, by the way, but is more aware of it, more diversified, founded on far better intentions (e.g. that nice stuff about gathering and sharing all the world's knowledge) and therefore more likely to survive, at least for awhile.

It helps to remember that all companies have souls born of founding purposes. And there's a helluva big difference between a search engine meant to find "all the world's knowledge" and one meant to find hot girls on a college campus.

Yet what matters far more than Facebook and Google is that we all live digital lives now, on a network that puts us all a functional distance apart of zero. (When we're connected, that is. The distance apart when we're not is infinite).

This is new to human experience.

What we know about digital life so far is largely contained within what we've retrieved from the analog ones that preceded it. To wit,

Marshall McLuhan says all technologies are extensions of ourselves. Hammers, pens, binoculars, cars and computers all give us ways to do what we can't do with our brains and bodies alone. What I just listed are early rudiments of what will surely come.

It helps to recognize that we are still going through early stages in our new Digital Age. Everything we know about digital life, so far, is contained within prototypes such as Facebook's and Google's. And all of those prototypes are just projects. If you don't doubt it, look at your computer and your phone. Both are either new or to some degree already obsolete. Hell, even the new ones are old. Nothing will feel older a year from now than today's latest Samsung and Apple mobile thingies.

It isn't turtles all the way down, it's scaffolding.

So let's at least try to look below what big companies, Trump and other dancing figures in the digital world are doing, and try to look at the floor they're dancing on—and the ground under it. That ground is new and unlike anything that precedes it in human experience. Nothing matters more than at least trying to understand it.