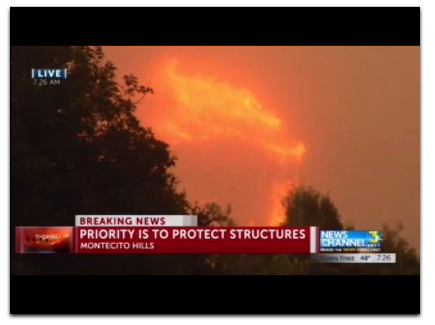 Nearly all of Montecito and much of Santa Barbara (including the area where we live) are now under mandatory evacuation as the Thomas Fire (#ThomasFire) approaches.

I'm reporting on this from our apartment in New York, while working the Web and watching the KEYT/KCOY/KKFX app on my iPhone and on my iPad over the Dish Anywhere app, which gives us a way to watch our home Dish Network TV system. On that I'm currently watching KEYT's over-the-air (Channel 3) broadcast. This will work as long as the house has power and an Internet connection. As of 9:15pm Pacific Time, it still is.

I would normally be writing about this on my blog at Harvard, but all of blogs/harvard.edu seems to be down. Bad timing. So I'm glad I have this channel, and thank @DaveWiner for that.

9:32am PST: Most of Santa Barbara is now under either voluntary or mandatory evacuation. This includes all the Riviera and downtown.

On Flickr, I just put up screen shots of KEYT coverage. Shortlink: http://bit.ly/thmsfr

I'll post this now, and date/time this and subsequent posts in the titles.