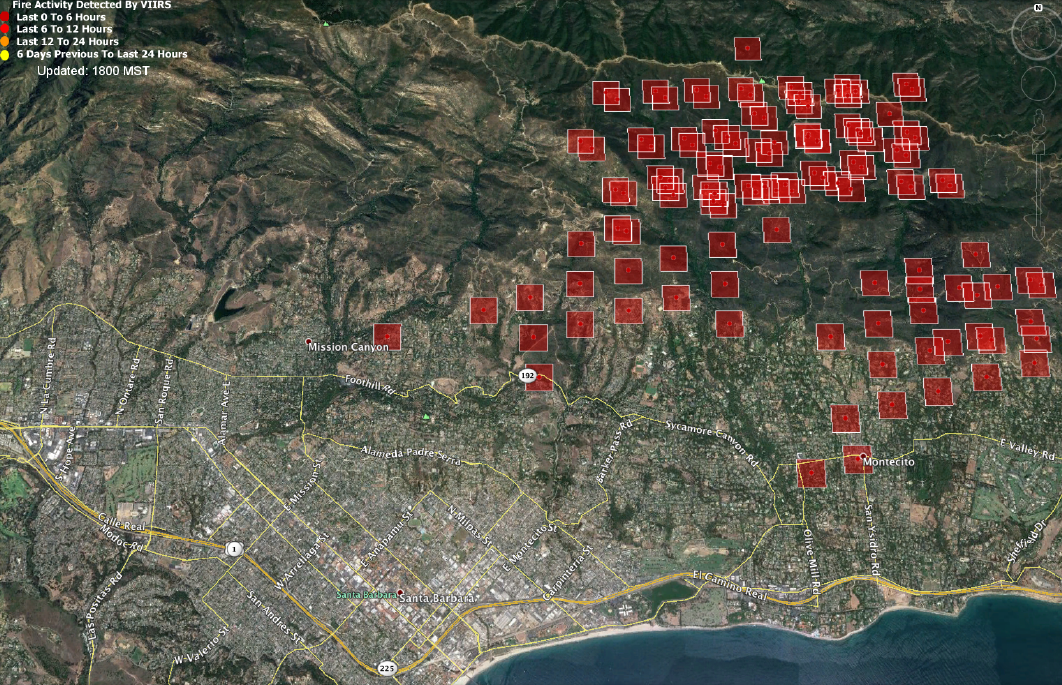 The #ThomasFire is now burning in spots inside the Santa Barbara city limits, most obviously in Parma Park, which is a  rural park on the north side of Stanwood Drive/Highway 192. But there are still no reports of structures lost. Clearly many more are being saved. (Scroll to the bottom of this post for updates.)

There are 973 fire engines deployed on the Thomas Fire case, with at least 500 engaged or ready to go in Santa Barbara and Montecito. Or so KEYT just said, live, here.

I've put up a set of screen shots at http://bit.ly/thmsfr . The last of these is a map (also above) showing just the last six hours of VIIRS satellite fire-spotting.  Plotted on Google Earth, they show active fire in roughly these places:

Note that VIIRS is a satellite that scans the whole Earth, pole to pole and doesn't pass over any one spot more than once per (I think) 24 hours. So this is not current. But it is kinda specific, and I'm not seeing this data unpacked elsewhere. So I'm sharing it here.

6:03pm: Capt. Zaniboni wants people to go to bed feeling optimistic. There are lots of firefighters, and equipment, dealing with the fire effectively, and the wind is slowing down. It can be gusty, but he feels good about it.

8:11pm: Water-dropping helicopters piloted with the aid of night vision headgear are being deployed against the fire. KEYT is covering that, and has night vision of its own. Again, go here for live coverage.