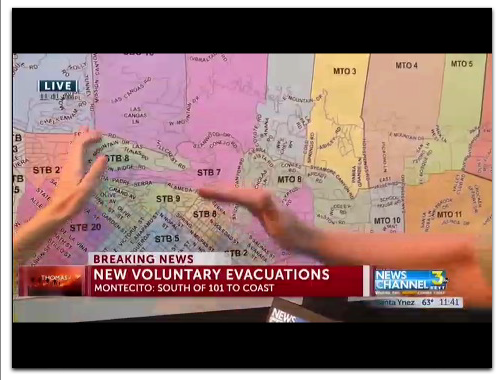 Santa Barbara Sherrif Commander Kelly Moore just explained on KEYT that  "the back side of the Riviera" is the main #ThomasFire fighting area right now. The fire is crossing Mountain Road, in the direction of Coast Village Road and Salinas Street, west to Sycamore Canyon. In this area are the viscinities of Westmont College, Eucalyptus Hill, Cold Spring School, Parma Park... the list goes on. If you're a local, you know where I'm talking about.

11:38am: KEYT reports a slackening of the wind. Smoke is now flowing upward, rather than across the landscape. That means some aircraft can get in. The sound of some choppers can be heard. Planes are seen far overhead. Flight is restricted right now in that area, so any aircraft that can be seen have official reasons for being there.

The current main fire fight is on East Mountain Drive between Oak Creek and Cedar Creek. There are "structure protection" engines in the 300 block of East Mountain Drive in Montecito, which the fire chief Capt. Dave Zaniboni calls the "urban interface."

11:55am: Talking to KEYT's John Palmenteri, Capt. Zaniboni says has had no reports of structures burned. Without looking at the Captian, I would take his voice to be Governor Jerry Brown's. They're close to identical.

I think the wind drop is a turning point. They can get aircraft in there, and the burned areas are now fire breaks. Still, the weather forecast is for high winds tonight in the direction of Santa Barbara.