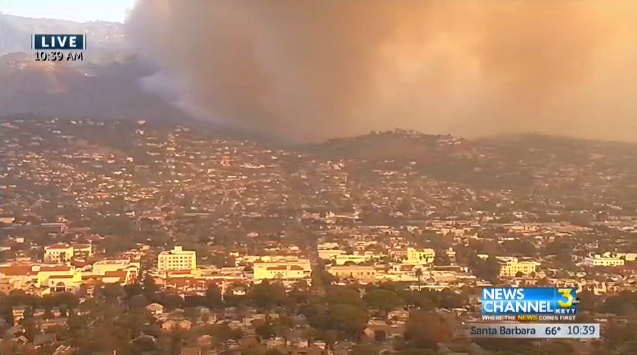 The picture is from 10:39am, when the winds were toward the south, and the #ThomasFire was vectored toward Santa Barbara, and everything you see was under mandatory or voluntary evacuation orders. Mandatory areas were all in the uphill areas. Our own house is somewhere in that picture. Since this shot the wind has moved more toward the east.

If you're in the Santa Barbara area and have any #ThomasFire concerns that require official attention, call 211 or 805-681-5542. Note that the former is for Q&A and has had trouble, KEYT says.

There is an evacuation center at the UCSB rec center.

KEYT is open sourcing its audio for any radio station to use. KTMS/990am, KTYD/99.9fm, KSBL/101.7gm and KIST/107.7fm are all carrying KEYT's audio right now, the station says. All have the same owner, and similar looking websites. KTMS and KTYD both broadcast from Gibraltar Peak, while both KIST and KSBL are on West Camino Cielo, which is west of 154 on the far side of town from the fire. KSBL also has a construction permit to radiate from 20 miles offshore on Santa Cruz Island.

During the Ventura phase of the Thomas Fire, when all the main hills and mountains on the north and west side of town burned, most of the FM stations that broadcast from high places there were at least temporarily knocked off the air. Last I listened, on Thursday, some were still gone. In Santa Barbara, most FM stations radiate from Gibraltar Peak, which is a high point along Gibraltar Road, leading up to East Camino Cielo on the Santa Ynez mountain ridge behind town. Gibraltar Peak was in both the Tea Fire and Jesusita Fire burn areas.

A friend just called from Buellton, in the Santa Ynez Valley (the wine district that starred in the movie Sideways) reporting many fire trucks coming and going, as fire fighters catch some sleep at the local hotels there.