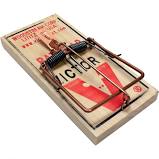 When our New York apartment building developed a mouse problem, they brought in an exterminator (or pest control, or abatement, or whatever they call those services now) to take care of things. The company put out sticky sheets of cardboard all around the perimeters of our rooms, plus little boxes of poison. A crew would come back from time to time and check on these things, all of which did exactly nothing other than cost the landlord money.

So I went to a nearby hardware store, bought some old fashioned mouse traps, which ought to be called mouse killers, because that's what they are. Mounted on a small piece of wood is a rectangular bar on strong spring, which cocked has the power to whap down on a mouse and fold it in two. The trap snaps when the bait moves and releases the bar holding the kill-bark cocked. Those worked. We knew the mice were gone when none were left to touch the bait and get snap-folded in two.

Here at our Santa Barbara place, we've had a similar problem lately, with rats. Or, a rat. Every night around 12:30am, it would make loud noises in the space under our bathroom cabinet. We don't know what path it took to get in there, because it appears to be completely sealed from all times; but it apparently comes and goes because it also feasts on tomatoes in our kitchen pantry. So this time I got a rat trap, which is a big brother of the mouse trap. It's by the same Victor brand that's been making these things since the 19th Century. I baited it with some Trader Joe's no-salt organic crunchy peanut butter and put it on the floor of our pantry. Sure enough, around midnight a loud SNAP! echoed through the house. I went to the pantry, and there was our rat, folded in two.

I've got another trap set now, so we'll see if our late rat had companions. I kinda don't think so, because the noise in the bathroom cabinet was also gone last night. But we'll see.

Compared with the fires, which are now snowing the cremains of Ventura County all over our house and yard—and scaring the shit out of the whole South Coast—the rat is a small thing. But an old fashioned trap does beat the more expensive options, and that's cool.