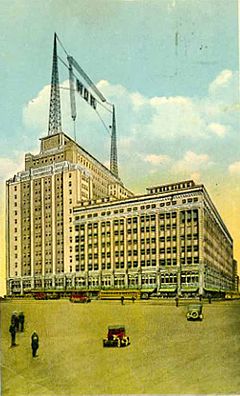 Tennyson called now—the present moment—"an arch wherethrough gleams that untravelled world, whose margin fades for ever and for ever when I move."

We tend not to see far through that arch. Hunter-gatherers still, we are built to walk, run, grab and build through a range of anticipations that run from microseconds to years in the future, with nearly all our attention on what's in the very next stage of now.

So we miss the big breakdowns that take a lot longer than now to happen. We also mistake persistence for success.

And such is the state of radio: a topic I can't help obsessing about, because it was so much a part of my life for so long. I like to think we'll miss it when it's gone, but I suspect not.

Here's one interesting fact: there is far more variety on the only (and therefore the monopoly) provider of satellite radio in the U.S. than you'll find anywhere in the country on terrestrial radio bands. Not in New York, Boston, Los Angeles, Chicago or San Francisco. Those places all have some innovative radio stations, but not the buffet of formats featured by SiriusXM.

Anyway, those are a few ruminations while I try to remember a few radio websites maintained by individuals far more obsessive than I. A list:

Note: In response to this post, @samueljscott points  to this good news for what's left of radio. by @martindave.

BTW, that image at the top is from this Wikipedia entry on Bambergers, the department store. WOR, still a landmark New York station, started atop that store in Newark. In those days they thought transmitters belonged on buildings, and achieved electrical height with "clothesline" and "bedspring" antennae suspended between towers. Those were arch-like, which serves as a metaphorical coincidence here; but have long since been replaced by free-standing or guy'd towers. WORs three stand in the Meadowlands outside Newark near the west spur of the New Jersey Turnpike. It's the third site since the one on the store. For those who dig this kind of history, it's hard to beat REBUILDING A LEGEND: REBUILDING WOR RADIO FROM THE TIP OF THE MIC TO THE TOP OF THE TOWER, by Thomas R. Ray, III CPBE. Other interesting bits are here, here (that's deceased transmitter #3) and here (the transition from #3 to #4). To me #2 was the best. If you want to know why, ask. :-)